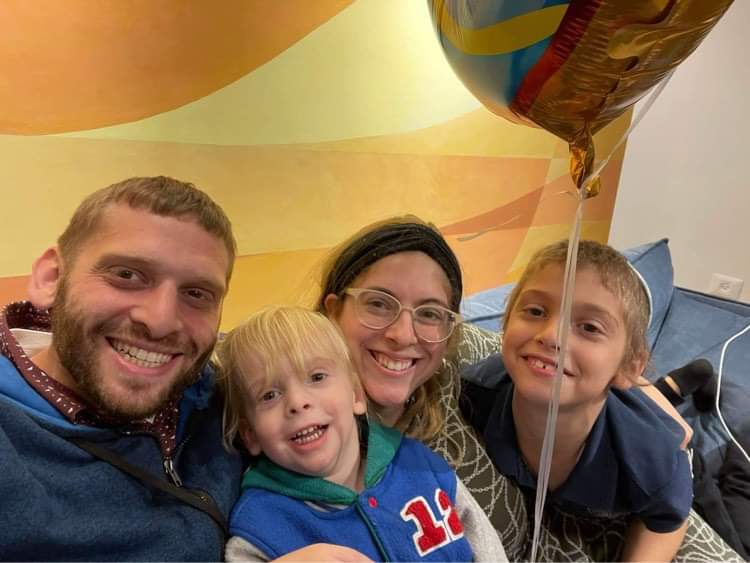 I came to Israel as a single guy to work as a madrich in a yeshiva. Several months into the year, my friend, who owned a small company that serviced nonprofits, offered me a side job, very part-time, for $10 an hour, which I accepted. My job included posting content on social media platforms such as Facebook and Pinterest as well as email marketing. This was in the early days of social media when the power of advertising on these platforms was virtually unknown.

After a year in the yeshiva, an opportunity fell through for a position that I was interested in taking, and I ended up agreeing to work for my friend for four to five hours a day instead of the one hour I had been doing until then. This would take my job to the next level, as I became my friend’s social media marketing manager.

My background was in math and I found the early data on social media marketing to be fascinating. I analyzed the data and realized there was a lot of potential to maximize results. I felt like I was sitting on a gold mine.

Several years later, after seeing consistent and obvious results and becoming somewhat of an expert in this nascent field, I realized that we had been running after the wrong clients. Why service only non-profits, who worked with severely limited budgets, when we could be doing the exact same thing for for-profit businesses? We could be making real, serious money! My boss, however, wanted to keep his customer base of nonprofits.

I was enthusiastic about my idea and considered opening my own business, but by this point I was married and had a family to support, so leaving my job was not so simple. Nevertheless, my passion for this idea would not let me rest. I knew I could help business owners scale their growth exponentially if only they would embrace the potential of social media advertising. The question was if I could convince potential clients of this truth. Would they trust me to be the one to run their social media campaigns? And most importantly, would my wife and I have enough savings to last us until I had a steady stream of clients?

I could not put my dream to rest. I convinced my wife to give me six months to see if my idea would work. She was incredibly supportive and let me do my thing.

That half a year of sweat, toil and tears yielded disappointing results, and I gained zero clients and made no money. Logic would have dictated that I should give up and find a day job, as many of my friends were doing. I was offered an opportunity to work in another marketing agency, bringing home a salary on a tlush (Israeli pay stub). But the 8,000 NIS a month – without room for serious growth – was unappealing to me. If only I could break into the field on my own, I knew I could easily be making double, triple, or quadruple that amount!

I convinced my wife to give me just another six months. She was (and is) a trooper.

Unfortunately, these additional six months yielded similar dismal results – but not for lack of trying! It had been a full year since I had left my job and begun knocking on virtual doors, met with rejection more times than I can count. My wife, meanwhile, was carrying the heavy load of nursing school while trying to take care of our baby. Despite the tension, I truly, strongly believed that I would make it – I just needed to convince everyone else how I could help them!

I begged my wife for another six months’ reprieve, and thankfully, she gave her consent.

Just how did we survive during this time? Simple: We were slowly eating up our savings from our wedding. Our parents had made us a standard Toronto wedding, which had yielded us decent gift money that had been paying our day-to-day bills. Nevertheless, we both knew that this would not last us forever. (In fact, by the time the experimental period was over, we had eaten through our entire savings and had not a shekel left to our name.)

Here is a note of caution: Do not try this at home. Seriously, I do not recommend you go 18 months with no income on some dream you have of building up your own business. It is not fair to your family and it is irresponsible. Most people do not make it, and you are better off taking a day job and working on the side at nights or weekends to pursue your dream business. But something inside me compelled me to push forward. I knew with a deep conviction (or was it insanity?) that I would emerge successful at the end. It was just a matter of time.

One of the strategies I had been following was establishing name recognition for myself, and I did this by posting two hundred blog posts giving over helpful content. I posted these over all social media platforms. Consistency was the key, and I didn’t let up no matter what was going on in my life. Unfortunately, my efforts were for naught, as the blogs took me nowhere.

At this point, I decided to switch over to videos instead, and recorded myself with the same consistency as I had done with blogging, eventually recording over 1200 videos! This was a step in the right direction, as I slowly started building up my reputation and developed a name that people associated with social media marketing.

Aside from getting my name out, the videos gave me authenticity. In 2017, I flew to the US to attend Social Media Marketing World, where I met someone with connections in the industry. He went home that night and told his wife about me, and she proceeded to spend the rest of the night watching my content. She was blown away and convinced her husband to invite me as a guest speaker at his own private event, Social Media Day in San Diego. I accepted the invitation and spoke for the first time to an audience of six hundred people! The videos had been worthwhile.

Another strategy I used was that at any event I attended – either as a speaker or as a participant – I networked extensively. Though speakers at events do not usually spend their time networking, it was the best way to promote myself and my service. I would stay up all night networking if I felt it worthwhile. Through this, I made some valuable connections, not only for myself but for others as well. I am the type of guy that loves making connections. If I cannot help you but I know someone else who can, why shouldn’t I try to make a connection between the two of you? I genuinely like to help people, and this is one of the reasons I was able to earn people’s trust.

Slowly, through my videos and networking, I started gaining real clients. One happy client yielded a recommendation to another. Business owners finally started realizing what I had known all along – that marketing on social media platforms really worked! I started to become a trusted name in the field.

That isn’t to say that all was smooth sailing. I remember in the early days courting a particular lead for six months, constantly refining our strategy. It was a big blow when she decided at the last moment not to hire me. Though I had wasted precious time and resources on this lead, I did not let this rejection drag me down. I knew I was an expert in the field and that my service was an incredibly valuable one for businesses. I just needed to convince everyone else of that too.

And over time, I did. Consistent posting videos, tireless networking, courting every lead, and showing actual results yielded big-time clients. As I grew, I made the decision not to scale my business up by hiring additional staff. The market can be volatile, and I did not want to be placed in a situation of having to fire employees who were depending on me if I ever lost a big client. Instead, I work with a small number of well-paying clients, mostly eCommerce, managing their Facebook and Instagram advertising.

Today I am known as the “King of Facebook Ads.” I do not even need to do much advertising of my own. My thing has become to take selfies of myself working out (“sweaty selfies”) and I post these on social media platforms. I know my exercise routines are not particularly interesting and don’t have any connection to my professional work, but I feel that just “showing up” helps me stay top of mind.

I am incredibly thankful that those difficult 18 months of non-stop toil ultimately yielded a highly profitable business that I love running. I love the lifestyle and the freedom it gives me to set my own schedule. I’m now able to be a stay-at-home dad while my wife pursues her dreams of changing the nursing industry for geriatric patients. She is doing incredible work and I’m extremely proud of her.

I end with a cautionary note: Again, I would not recommend others follow in my path. I had the resources, the wedding savings and a supportive spouse, which enabled me to chase my dream for almost two years when logic would have dictated that I should give up. I got lucky and I am very thankful, but my recommendation would be to take a more moderate approach. If you dream of growing your own business, you will need serious grit and determination to make it happen, and with G-d’s help you will be successful. But in the beginning, do it on the side while you support your family, so if it does fail, you will still be OK.

Dan and Laura Major – The World of Academia